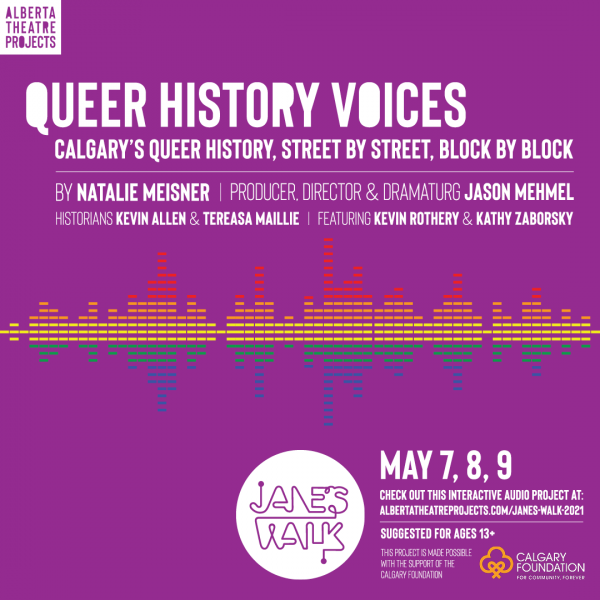 Two characters; Handsome, a queer elder who has lived through much of the history (played by Kevin Rothery); and Maxine, a young queer historian and researcher looking to preserve this legacy and bridge it with the present (played by Kathy Zabrosky) bring the true stories of Calgary’s queer history to life.
Between Handsome reminiscing about the history and Maxine providing a historical context, this will illuminate a section of downtown Calgary that citizens may not even know existed.

The walk begins at the original location of Club Carousel, one of the earliest spaces made for queer individuals to gather.

“Our project aim is to honour the lives of LGBTIQA+ / queer people in Calgary. Our casting, research and writing team is made of LGBTIAQ+ writers, researchers and actors and their allies.” – Natalie Meisner, Playwright

Jane’s Walk Calgary has been an initiative of Calgary Foundation since 2008, as part of Jane’s Walk International

They are free, locally-led walking tours inspired by legendary urban activist Jane Jacobs, in which people get together to explore, talk about and celebrate their neighbourhoods. Where more traditional tours are a bit like walking lectures, a Jane’s Walk is a walking conversation. Walks can focus on almost any aspect of a neighbourhood, and on almost any topic you can think of. Walks can be serious or funny, informative or exploratory; they can look at the history of a place, or at what’s happening there right now. Anyone can lead a walk–because everyone is an expert on the place where they live!

Jane Jacobs (1916-2006) was an urbanist and activist whose writings championed a fresh, community-based approach to city building. She saw cities as ecosystems that had their own logic and dynamism which would change over time according to how they were used. With a keen eye for detail, she wrote eloquently about sidewalks, parks, retail design and self-organization. At the core of her work and thinking was the need to get out and walk your city and observe how people, through their actions and interactions, create communities with a strong sense of belonging.

Jane’s Walk Calgary is organized by the Calgary Foundation.